It’s an unprecedented time in cannabis culture. Many of us can buy some flower or an edible at a corner dispensary right now – which would have been unthinkable in our parent’s time.

As legalization progresses in the US and across the globe today, it’s slowly undoing over a century of near-total global prohibition.

We’re accustomed to cannabis being illegal. But how did this substance (the use of which has directly caused an all-time total of zero deaths) – become universally banned in the first place? 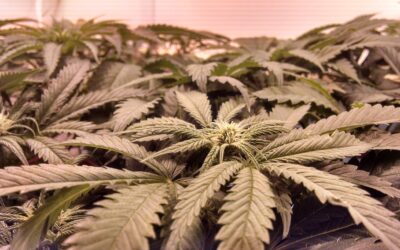 A century of prohibition

Humans have a very long history with the cannabis sativa (or hemp) plant. Until about a hundred years ago, people in many parts of the world used cannabis for recreation, inspiration, medicine, and even religious practices.

In the 19th century, Brazil, South Africa, and Greece became some of the first nations to criminalize cannabis. Historians suggest that early cannabis bans were a form of prejudice by governments against their migrants and working-class citizens, many of whom smoked cannabis recreationally. (In Brazil in the 1800s, cannabis was called “the opium of the poor.”)

And in the 20th century, cannabis prohibition came to the USA.

The first US federal regulation of cannabis was the Pure Food and Drug Act of 1906, which the government enacted in response to patent medicines making fantastical claims of effectiveness without evidence. The law limited the sale of cannabis to pharmacies, and required a doctor’s prescription to use cannabis for medicinal purposes.

Over the next few decades, several western and southwestern American states passed “cannabis poison” acts that banned the plant completely. It’s very possible that these laws were a response to the economic fallout of the Great Depression; members of the American public harbored animosity toward foreign migrant workers – as employers favored them for low-paying manual labor jobs.

Workers from Mexico, some of whom smoked cannabis recreationally, were stigmatized. Opponents to cannabis began using the Spanish slang word marijuana as a new term for the cannabis plant.

The 1925 Geneva Convention at the League of Nations then banned the international production and trade of cannabis (the authors of the convention called it “Indian hemp.”)

And in 1930, Harry Anslinger became Director of the Federal Bureau of Narcotics, and would do more to change the criminal justice system than perhaps any other person in American history. 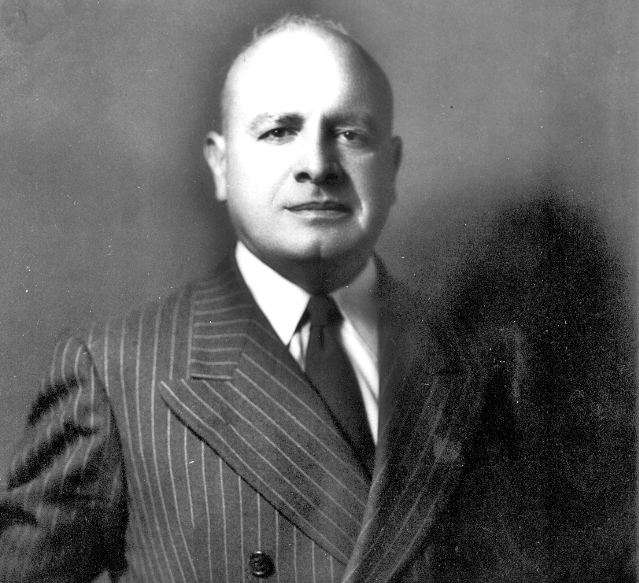 Anslinger was a self-styled “incorruptible” moral crusader who made no secret of his racial prejudices. He sought a substitute victory after the failure of American alcohol prohibition in 1933, and set out to ban cannabis throughout the entire country.

He needed to orchestrate a PR coup to make this happen, and he soon found the right man for the job – newspaper magnate William Randolph Hearst, who Anslinger partnered with on a national media campaign trumpeting the “dangers” of using cannabis. 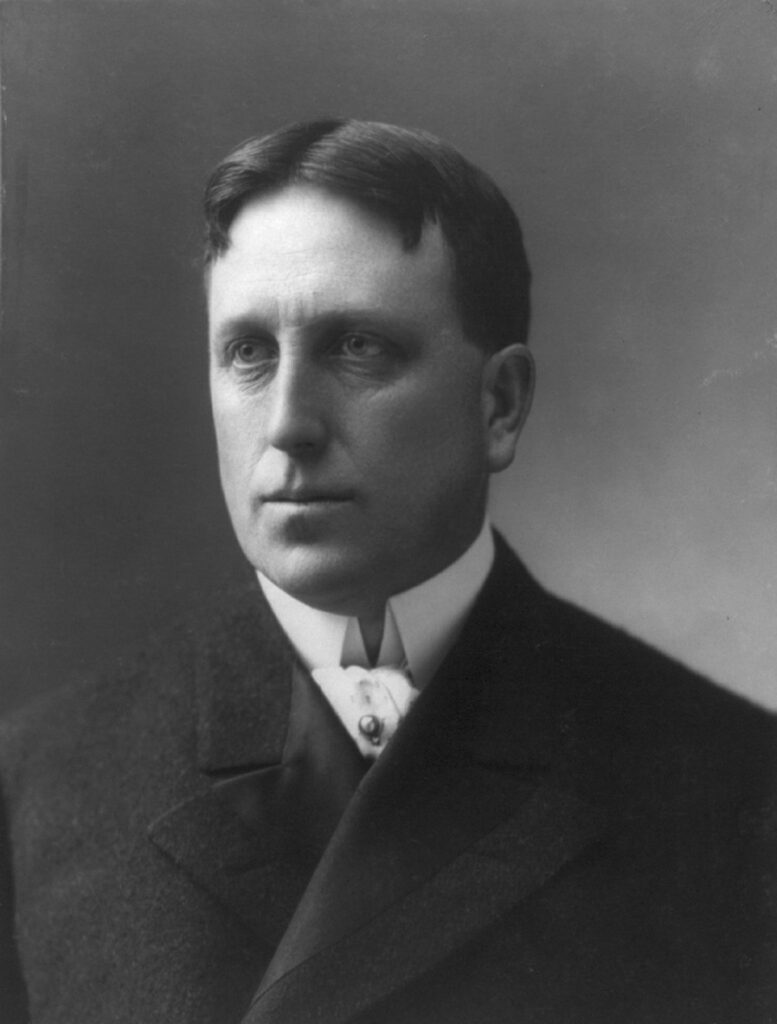 No factual basis was ever found for the claims made in Hearst’s articles.

Hearst had his own motives; his timber empire was threatened by the versatile hemp plant (we can produce clothing, paper and many more products from hemp). He also had investments in the DuPont Corporation – which had just developed and marketed nylon as a hemp fabric substitute.

There was almost certainly an element of vengeance Hearst’s campaign as well – during the Spanish-American War, revolutionary General Pancho Villa had seized 800,000 acres of Hearst’s paper forests in Mexico, infuriating Hearst.

This story should not be told without highlighting Anslinger’s hypocrisy – during the Prohibition on alcohol, Anslinger stated on the record that cannabis was “not a problem”, and that there was “no more absurd fallacy” than the assumption that it made people violent.

The coup is completed

Hearst and Anslinger’s propaganda push was successful. It generated enough public hysteria towards the cannabis plant that the US Congress eventually passed the Marijuana Tax Act of 1937.

The law charged farmers a tax to grow hemp – but purposefully did not establish a bureaucracy to process these tax payments. As farmers had no way to pay the tax, they legally could not produce hemp. By default, cannabis became illegal throughout the entire US.

Decades later, President Richard Nixon’s administration tightened restrictions on cannabis even further with the Controlled Substance Act (CSA) of 1970. This law established schedules, or classifications, for narcotics, and cannabis was placed under “Schedule 1” – for “drugs with no currently accepted medical use and a high potential for abuse.” By contrast, cocaine is a Schedule II drug – meaning the US government officially considers it to be “less harmful” than cannabis. 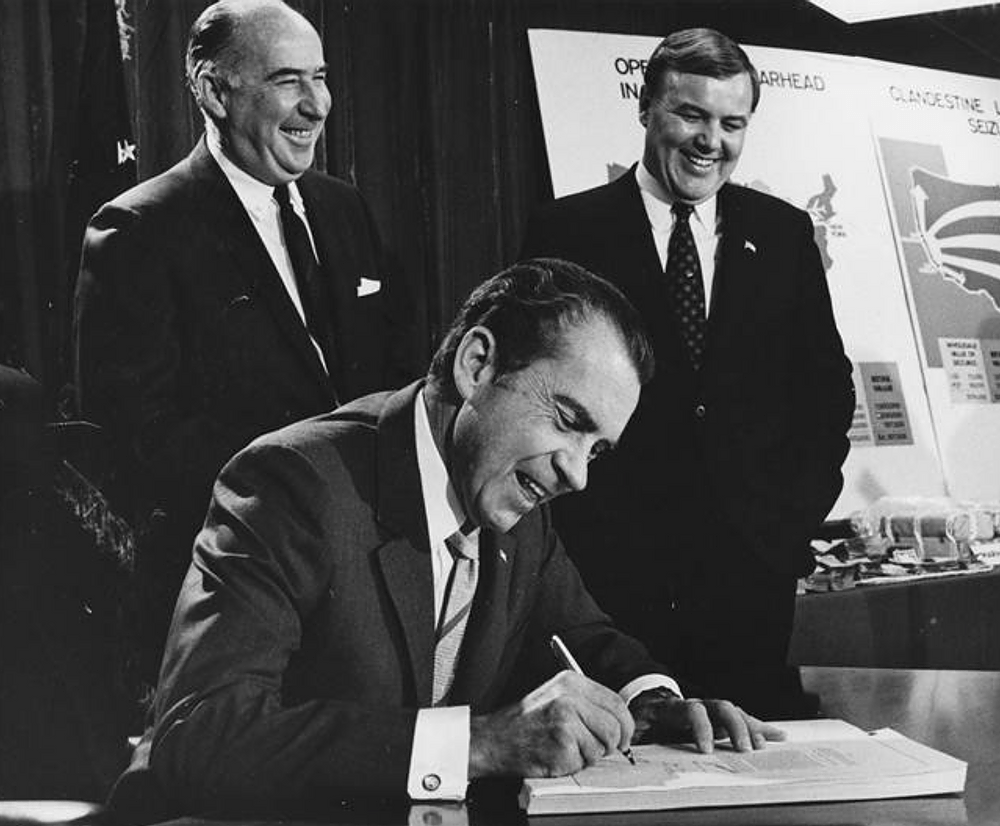 Doctors assigned to the CSA’s legislation process proposed that cannabis be classified as Schedule II, which would have made cannabis subject to medical research. Nixon, however, refused – and instead sought complete criminalization of cannabis as a means to quell the day’s counterculture movement that opposed his policies.

Nixon didn’t stop there. His White House announced the “War on Drugs” in 1971, and established the Drug Enforcement Administration in 1973. The American government also pressured several other nations, including Nepal and Afghanistan, to enact cannabis bans of their own in the 1970s.

Meanwhile, the CSA brought about State and Federal mandatory sentencing minimums for cannabis offenses (including simple possession). This led to the modern era of mass incarceration, which turns significant profits for the corporations that run the prison-industrial complex.

The Controlled Substances Act is still in effect at the federal level today (September 2020). And while cannabis has been legalized in parts of the US, the drug war continues. In 2018 alone, there were 1.6 million drug arrests. Nearly 1.5 million of them stemmed from the crime of cannabis possession.

The status quo of the America that Hearst and Anslinger wished for remained in place for decades; cannabis remained completely illegal, even as a great many Americans experimented with it privately.

But the American cannabis movement achieved a stunning breakthrough in 1996, when voters chose to legalize medicinal cannabis in the state of California. At that point it, it had been 90 years since the passage of the Pure Food and Drug Act, the U.S.’s first official anti-cannabis legislation.

And as of today, thirty-three American states have voted to permit medicinal cannabis, and recreational cannabis is legal in eleven states.

This is incredible progress – but recreational cannabis use is still prohibited in thirty-nine states, and thousands remain imprisoned for minor drug infractions.

The cannabis movement has more work to do – but it’s work that should become easier as the next generation heads to the polls. 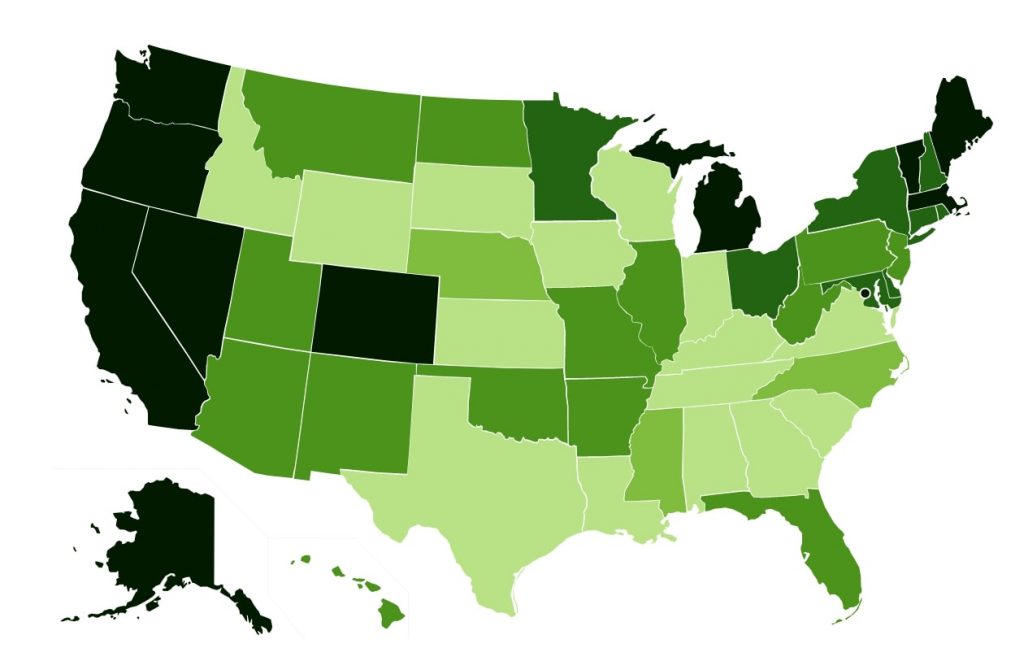 Northern Standard’s robust full-spectrum cannabis oils have been the industry standard since we launched in 2016.

Go here to see where our extracts are available, and view our full line of vape accessories here. 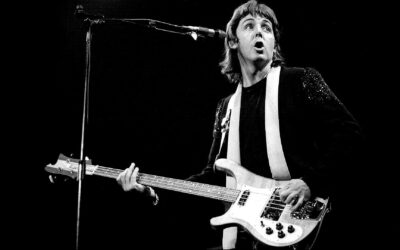